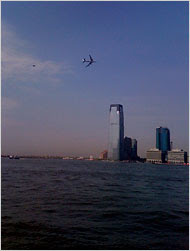 Between 10 and 10:30 this morning a mock up of Air Force One, the equivalent to a 747 and two F-16 fighter jets were spotted flying low over the Hudson and making several passes by the Statue Of Liberty. Thousands of people on both side of the river hurriedly evacuated their buildings in what they feared was a replay of 9-11. Apparently the FAA had approved the maneuver for what was a photo shoot for the Air Force. The FAA claims that the Mayor's office, 311, and 911 systems had all been notified beforehand.

Who is the genius the dropped the ball on this one? Surely such a scene would likely freak just about anyone out. How about just a little sensitivity here!
Air Force One Backup Rattles Nerves (CityRoom/NY Times)
F-16s Buzz Lady Liberty, Rattle Nerves (WNBC)
Moment Of Fear As Jet Flies Over Lower Manhattan (MyFoxNY)
Email Post
Labels: Unusual