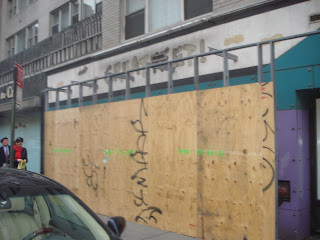 So maybe the UES is a little too clean? Maybe a construction site could be boarded up with fresh plywood and nobody would touch it. Nobody would post a bill or tag it like the blank canvas it is as in other areas? Well the folks boarding up the future CVS site at 84th and Lex have a solution to that. It's prefab graffiti! Yes, these boards have already been spray painted, vandalized you could call it, so that the folks on the UES can't be accused of having no grit or being too soft. Ahhh, I feel so much grittier now. Thanks CVS folks! On the bright side, at least they are recycling.
Email Post
Labels: Upper East Side