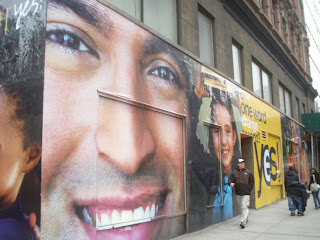 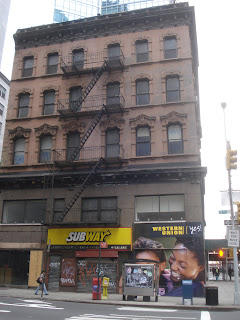 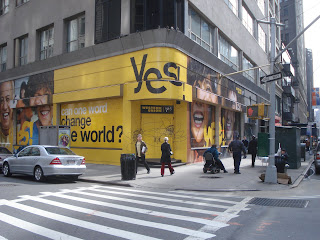 Shrink Wrap On 22nd And Broadway

I was dismayed to find yet another example of shrink wrap building advertising this morning on the corner of 57th and 3rd Avenue. The building has been vacated, tagged with graffiti, and now a gigantic Western Union ad smothers the storefront and side of the building. The sign is 12 feet high and covers 15 feet on 3rd Avenue and approximately 80 feet on 57th Street, far larger than even and over sized billboard. We are talking 1140 square feet here! This Western Union ad is nearly identical to the wall of shame on 22nd and Broadway and far larger than the Snickers wall of shame on 13th and University.

Again, there should be a law against this! Perhaps signage on vacant storefronts should be limited to 50% of the window space and prohibited from the buildings themselves.

On a side note, looks like another condo could be in the works for this corner. Subway and Wendy's are out and the building is vacant. Air rights were transferred to 207 East 57th Street a few years back, so its fate is anyone's guess. The building was built in 1874 as a bank and apartments, steps from the old Boston Post Road. The New York Times has a great article about it's rich history. And now, just a corpse that has been shrink wrapped to honor Western Union.
Email Post
Labels: General