There Should Be A Law Against That.....Dreaded Street Solicitor 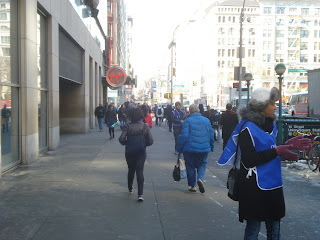 Maybe it's because it's a cool, gray, rainy Monday, but I have a beef that I want to share.

Street solicitors are really starting to bug me! It just seems I can't get off the train at Union Square without having to slalom through a half dozen Children's International representatives nowadays. Then I turn the corner only to have to avoid ACLU solicitors. Really eight solicitors and a guy trying to give me his homemade CD then ask for money, and a pair of homelss folks in just 2 blocks! I have far more sympathy for the enterprising gentleman trying to sell his CD in front of Virgin (despite his tactics) and the homeless than the corporate beggars. Where did these people come from? When did this all start? How much do they pay these folks to get in your face?

Hey, I give to charity, and I consider myself charitable in general, but when I am trying to get to the office or I am running to an appointment, do not block my path and ask me the same thing for the 1000th time this year. No, I do not have a minute for children, the ACLU, or gay rights!
I guess it's the tactics that really bother me. I have no problem with people exercising free speech, and I won't mind if these just sat at a table like the people trying to give away cats. But, is this really a free speech issue? These folks are getting paid, and whether it's a for a non-profit or not, it is panhandling. The worst part is that some of these young folks are overly aggressive- jumping in your path, literally trying to block you from going further. This really crosses the line. And, who in their right mind would give some stranger on the street cash or a credit card number? It just makes no sense!

Anyway, I know that there are laws against aggressive panhandling, perhaps they should either be amended to include charities or simply enforced on charities. If it hasn't already been done, there should be a law against that!
Email Post
Labels: Unusual