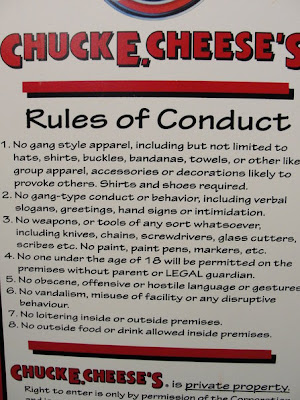 Welcome to Chuck E Cheese's in Harlem! The welcome starts with an ominous set of rules posted inside the front door. Among them, #1, no gang style apparel (including hats, buckles, bandanas, etc....). Um, okay, didn't know that a kids pizza arcade, attracted such an element. Number 2, "no gang style conduct or behavior, including verbal slogans, greetings, hand signs.....".Wow, this place must just be a mecca for gangsters! I can just now see them doing battle over the 4' diameter miniature carousel. Then #3, "no weapons or tools whatsoever, including knives, chains, screwdrivers, glass cutters, scribes....". Holy crap, you'd think you were walking into a prison or something. I had to look up "scribe", which with the help of a friend on Facebook, I found was not a blogger or author, but an etching device, which in Chuckee's gang land could be equally useful as a shank.
My experience at Chuckee's was nice. My daughter wanted to have her 6th birthday party there, and the only one on the island of Manhattan is at 124th and St. Nick. Sure, it was chaos, but it was kiddie chaos, just like you would have whenever you put a few hundred kids together with each other, arcade games, and sugar. Parents watching after, supervising, and sharing in their kids' joy is just that whether in Harlem or Tribeca, or Minnesota. What strikes me is that I'd be willing to bet that they don't have these signs in Minnesota and they wouldn't have them if there was a Chuckee's in Tribeca (correct me if I am wrong). I wonder who up the corporate chain, sitting behind a desk decided that a Chuck E's in Harlem was a gang risk? Is this racial or socioeconomic profiling? Straight racism? Have they had a big gang issue there that we haven't heard about? I'm not sure, but maybe someone should keep an eye on Chuck E Cheese himself, after all, he has an over sized baseball cap with a big "C" on it, and keeps hand signaling with his thumb.
Email Post
Labels: Harlem