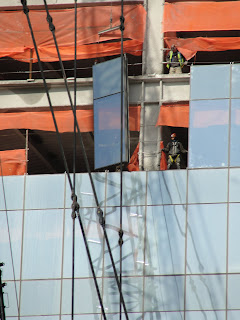 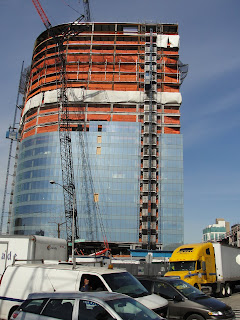 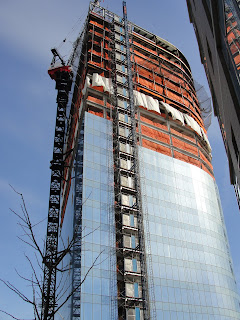 Sometimes pictures do not do a building justice, and in this case the scale is lost. In person, this 662,000sf, 22 story office building at the top of Jackson Avenue and Queens Plaza appears as a behemoth. It simply dwarfs everything in it sights, not that this is a bad thing on one of the grittier corners of Long Island City. The LEED Silver contender has also been a remarkable quick build, especially compared to the many stalled sites in the vicinity. It was only back in November 2008 that I reported that the old Queens Municipal Garage had finally begun demo. Given that the Dep't of Health has signed on for a significant portion of the space available, it appears that Tishman Speyer has a hard to come by winner here.
LEED For Core & Shell In LIC (Greenbuildingsnyc.com)
Gotham Center (Wired New York Forums)
Email Post
Labels: Long Island City