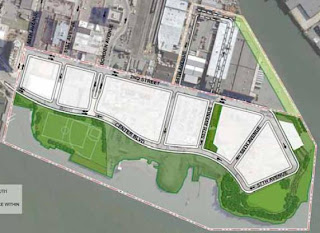 I've recently received the "Final Scope Of Work" report for Hunters Point South from the city. There are a few significant changes to the proposed project. Here is a partial list:
1- The amount of Parkland at Site B has grown from 10 acres to 11 acres. The city tells me that they have "re-calculated" estimates and also added .35 acre along the South side of the project on the Newtown Creek.
2- The project has gotten even denser. While the number of units at "Site A" remains 5000 (60% affordable rentals), the number of units on the privately owned "Site B" (currently the Budweiser plant) has grown from 1500 to 1650 (of which 20% will be affordable).
3- The school is now bigger. Originally the school was listed as 150,000sf for 1250 Sixth-Twelfth graders, the revised plan calls for 180,000sf for 1600 students.
While the "Final Scope of Work" notes the numerous comments, objections, and concerns of local residents and concerned parties, it seems as if none of them were taken into consideration by the EDC. In fact, the plan has simply put gone from bad to even worse. While the city may have "recalculated" to find an extra acre of parkspace, they also found room for another 150 units (the size of a large building) and 350 more students. The project is yet denser, and by logic taller.
I still contend that the city should simply rezone "Site B" and allow a developer to build large in exchange for some affordable units, and sell 8 acres on the North end of Site A to a developer who would also be required to provide say 20% affordable, and take the massive proceeds from such a sale and build much more affordable housing elsewhere. The remaining 22 acres should be a public park, open space which the community needs and is sorely lacking. This plan would reduce the total density to 3000 units (1500 in each A and B) from 6650 the city plans, and more than double the park space. The city would get 600 affordable units and cash for it's affordable housing program, while LIC would have less strain on it's infrastructure and more park space.
If anyone would like to see the full 72 page "Final Scope Of Work", I'm happy to email it to you.
Email Post
Labels: Long Island City