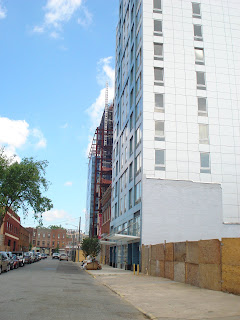 I know that LIC is booming with construction, but one particular street takes the cake, Purves Street which is a block North of Citi Tower and East of Jackson. The entire street, a dead end, is only one block long, but it is not short on development.

The first building to sell there (and sell it did) was 44-27 Purves, a 12 story luxury condo which has just a couple of units left.

At the edge of the block is 26-26 Jackson, a 43 unit lux condo, opening soon, which I discussed yesterday. But that is just the beginning.

At the end of the street a 26 story luxury rental tower is planned, next to it is a proposed 15 story tower, and a 30 story tower that has been approved (condo or rental unknown for either).

Already breaking ground is a 12 story luxury "green" condo by the group that built both 44-27 Purves and 10-50 Jackson. There is also a large lot available on the South side of the street that extends to Thomson Street, which is builable to 250,000sf that is on the market. And Kimaya Lofts is just around the corner on Jackson.

All tolled, there is close to half a million square feet of luxury built or planned on this one block in LIC. In a relatively confined area, it would be a great idea for the developers to get together and plan what the future of this block should look like- they can truly make this one dead end street into a model luxury enclave- the luxury cul-de-sac of LIC.
Condo Explosion In LIC North (A. Fine Blog, 8/07)
More On LIC From A. Fine Blog
Email Post
Labels: Long Island City