NYC Polls: Upper East Side Mobbed! Harlem, Not So Much 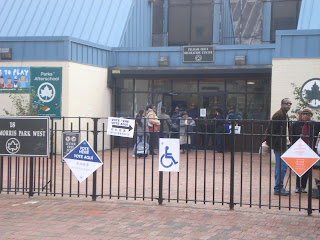 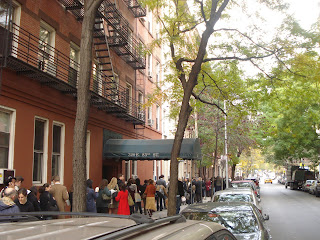 I have never seen lines so long in my lifetime on the Upper East Side. At P.S. 290, on East 82nd Street between 1st and 2nd Avenues, lines stretched both East and West from the front door, circled the block and nearly touched on the other side of the block. So, 2 block long lines on both sides. At Wagner Junior High on 76th Street, the line was longer than a block, and on 70th and First, the line was about the same. For people on the 1 block lines, the wait was about an hour. It could be fairly estimated that it was at least a 2 hour wait at P.S. 290.

But here is the shocker. I took a ride up to Harlem expecting even longer lines, but the longest one I could find was only 30 or 40 feet long. In fact there 4 or the 6 polling places I rolled up on had no line at all. They included 106th and 1st Ave, 128th St. West of Malcolm X and the West Side of Mt. Morris Park (minimal line-pictured above). Not what I expected. A small sample, granted, but a shocking one.

Still plenty of time to vote folks! If you haven't done it, get to it!
Email Post
Labels: Upper East Side