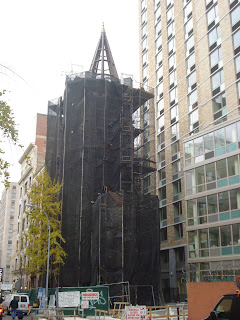 The shrouded remains Of St. Ann's 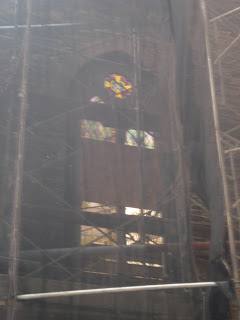 This may be one of the most pathetic things I have seen in all of my real estate blogging travels.
Is it the lamest attempt ever at historic preservation, or the world's largest lawn ornament? Whatever you want to call it, I call it mutilation, possibly sacrilege.

In what I guess was an attempt to appease angry area residents and preservationists, NYU, in it's pursuit of building the East Village's tallest building (a dorm, of course), the university decided to preserve the facade, or at least part of it. What is left is a steeple and front door in what is a 60' wide facade which is anywhere from 1' to 24' deep.

Yes, it was a beautiful structure, but to preserve such a small portion to adorn the sidewalk of faceless 26 story dorm is an insult. I really wish they had gone 100% one way or another. But, perhaps, this is a good thing. Perhaps, this will stand as a monument to our warped priorities or a warped culture, and future generations will learn from it. In the meantime, it is one of the most hideous displays in the city.