A Stroll Down West 14th: Condos And More 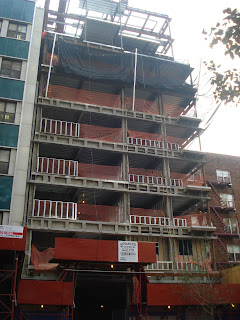 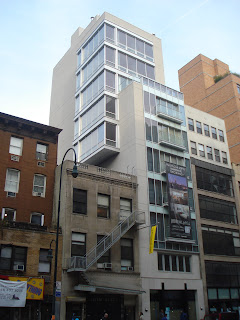 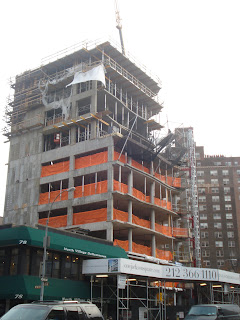 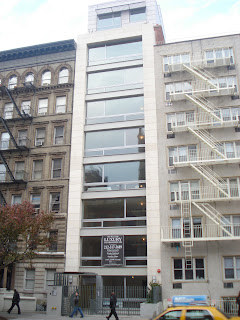 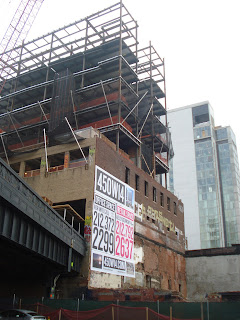 Some things never change. That was the thought I had on most of my stroll on West 14th from Fifth Avenue to the Hudson River yesterday. There were several stretches between Fifth and Ninth were the visuals would have been identical in the mid-1970's. I'm talking about beat up bodega-type storefronts, discounters, and buildings that have stood for a Century or greater and haven't been cleaned once in the interim.

Throughout this comforting urban blight there are some recent interlopers which grow more numerous as you go West and build to a crescendo at the Meatpacking District. The first is still a bit of a mystery, 14 West 14th. A permit is filed for a 40,000 sf, 10 story, 30 units building by architect, Kiska Group. No rendering was available on the architect's website, a google search was equally fruitless, and there is no indication, but it's likely to be a condo. Over the next few blocks, with the exception of One Jackson which peers over 14th at Eighth Avenue (although not actually on 14th), the interlopers take the shape of the mini-condo. These clean and glassy structures seem a bit out of place, like a visitor from the future. They also seem a bit lonely, not high profile splashy condos, but smaller boutique condos that don't get the same kind of attention. Sales of these units seem mixed. They fetch a pretty penny- $1300/ft. and up (and up), but there appear to be some prime units left at both 333 West 14th and Loft 14 (135 West 14th). You would think that someone would show these condos a little love. After all, they are smack in the middle of what is left of the real New York and with a close proximity to The High Line, Meat Packing, West Village and Chelsea, you couldn't be better situated.

As you head farther West it would seem that the transformation of the Meat Packing District to high end retail district continue in earnest. With the High Line as it's engine for optimism, every inch of usable or restore able space seems to either utilized or well on its way. The Standard Hotel (see yesterday's blog) on 13th and the river will certainly help fuel this trend. One interesting building was right across from the Mobil station, another High Line straddler, 446-450 West 14th. The lower 5 floors will be retail, it will have a roof deck, and then office space above.

While New York has changed quite a bit, you can only see it in bits and pieces on West 14th- until you get to the Meat Packing District that is!
Email Post
Labels: South of 34th