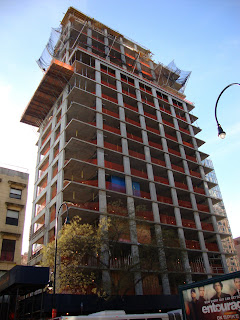 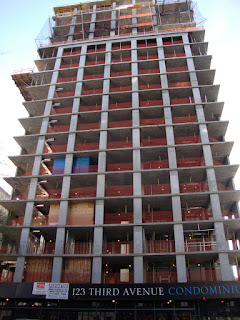 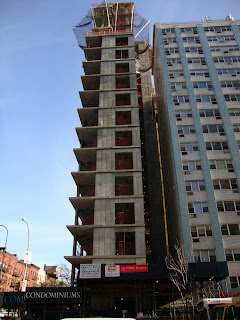 "Opening late 2009", or so they said. While the opening of sales may have been delayed, the completion date of 2010 looks accurate. The 19 story condo on the south east corner of Third Avenue and 14th Street will contain 48 units and be handled by Corcoran Sunshine Group. The Perkins Eastman designed condo was but a hole in the ground when we last visited in April 09', and now appears topped, so it is clear that it has eluded any financing issues to date. A New York Times article from September 09' states that the original offering plan had units priced at $1200/per foot, but a subsequent revised plan brought prices down to $1000/ft. Perhaps with the market finding it's bearings the delay is being caused by a revised, revised plan bringing prices back up. If units were to hit the market right now at $1000/ft., mark my words, this would be a run away sellout. Why? Just look across the street at 110 Third. The Toll Brothers effort, in better times, was a quick seller, but still commands asking prices of $1392 per foot according to StreetEasy. Translation: in this market, apartments at 110 Third are probably worth at least $1250/ft.. With a gym, outdoor movie theater/garden, and lounge, and assuming that the finishes and layouts are not botched, 123 Third should end up pricing comparably.
Email Post
Labels: East Village