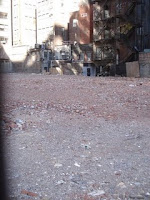 Reports: Macklowe In Deal To Regain Control Of Drake Hotel Site. According to a report in the Wall Street Journal, Macklowe Properties has teamed with new partner CIM Group to repurchase $400 Million in defaulted debt in order to retake control of the property. The debt will be repurchased anywhere from zero cents on the dollar to ninety cents depending on the tranche. Such a deal will salvage Macklowe's $220 Million personal stake in the property, for now at least. While some of Macklowe's debt may be forgiven, it will take a lot (bad pun) to forgive him for knocking down a beautiful 1926 Bing and Bing classic!
Macklowe Moves To Retake New York's Drake Site (WSJ)
Previously: Make The Drake A Public Space For Now (A Fine Blog 3/09)
Email Post
Labels: Midtown East