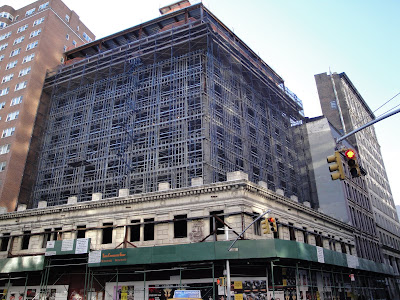 What's the news on the new McSam Hotel going up on 13th Street and Fourth Avenue? Absolutely nothing! For a minute there I thought I had a real headliner. I called McSam HQ out on Long Island to inquire about the status of the project and the receptionist answered by saying "we no longer own the property". Now that would have been news! Just before I was about to break the story the next day, I called again to confirm, and they suddenly asserted that they did indeed still own the property. Who knows, perhaps McSam is trying to de-leverage and has a deal going to contract? Time will tell.
Speaking of time, the property has been at a complete standstill since last June when a stop work order was slapped on the project. I reported previously about how people with lot line windows must be pissed, and later on how numerous people had complained to stall the project (although surely some of the complaints could have been legit). Now, you would have to imagine that it is possible that the caller that prompted the stop work order, may have had an arguable claim that the building was being built above what it is zoned for. Either that, or the city's slow DOB is costing Mr. Chang a boatload of money.
Email Post
Labels: Union Square