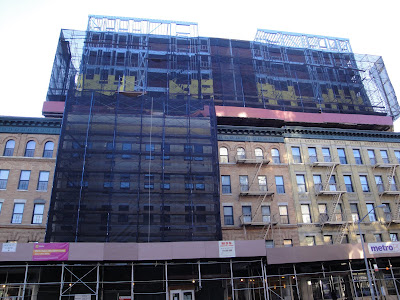 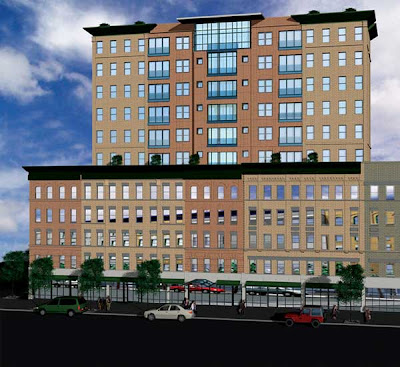 This one is a long story. Gateway Phase 2 on Frederick Douglass Blvd. between 113th and 114th was a new condo development that started selling in early 2005. Nothing had been built, but money was changing hands. The ambitious project was to be comprised of five existing five story buildings, a new five story building and the equivalent of 4-5 new six story buildings set back, but built right on top of the 6 buildings underneath. Well, come 2007, nothing happened. Buyers were obviously pissed, and there is little doubt that they eventually got their money back. End of story? Not quite. Fast forward to today and suddenly this concept is rising from the ashes, seemingly in the same form that was originally planned. There has been plenty of permitting activity over the past few months and the DOB website still show an 11 story structure with 88 units in progress. Calls to the owner have yet to be returned and there is virtually nil on the net since 2007- that is until now! Feel free to fill in the blanks in the comments section.
Oh, and LoFreDo? My newest neighborhood nickname suggestion for Lower Frederick Douglass.
Email Post
Labels: Harlem