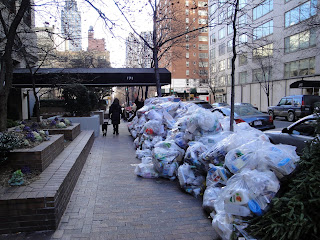 Alright, it's not the 17 day garbage strike of 1981, or of 1975, or 1968, but the mountains of garbage on the Upper East Side today may give you flashbacks! Many areas on the Upper East have not seen a recycling pick up in nearly 3 weeks, and according to many supers around the neighborhood, law still requires them to put the garbage out. Let's be clear, there is no strike. It is actually a confluence of events- snow removal, and pick up days being suspended for Christmas and New Year that built these mounds of trash. There was however, a "special pick up day" last Saturday, but at least on my street they never came.
My doorman has a theory- Sanitation spent so much on snow removal that they are secretly cutting back. He also joked that it was there because his union contract was nearly up. He wasn't the only one keeping it light, a tenant leaving for the day told him "have fun guarding the mountain!" In my immediate area the mounds should be gone by Friday, although, with a snowy Alberta Clipper forecast for Thursday night, the mounds may still yet grow.
Email Post
Labels: Upper East Side