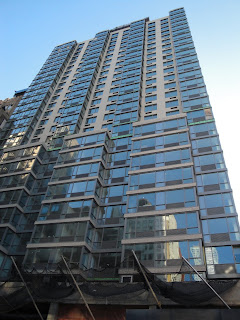 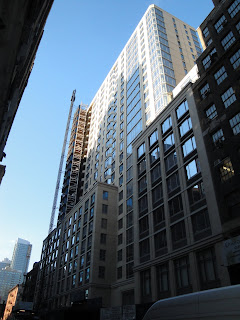 Clinton, Midtown West, Hell's Kitchen, The Garment District, whatever you want to call it, has undergone incredible transformation over the years. There has been plenty of development for the past 10 years on the water and more recently around the rail yards, but perhaps more intriguing is the sudden building smack in the middle of what is the Garment District. West 37th Street between 8th and 9th Avenues is just one example. It is there that, seemingly out of place, 2 tall luxury rental towers rise out of nowhere. Those towers, Emerald Green (Glenwood's highly acclaimed new Green effort) and Tower 37 (an 80/20 building), are totally out of character with the old Garment District, but at once in character with recent development in the area (I know that isn't saying much). Tower 37 had no shortage of controversy during construction with the blow up union rat making several appearances and rallies against the non-union labor that was building it. In time that will all be forgotten or never noticed by many; the real question is, will people warm up to living here? It is Manhattan and Midtown, so eventually things will happen.
Email Post
Labels: Midtown West