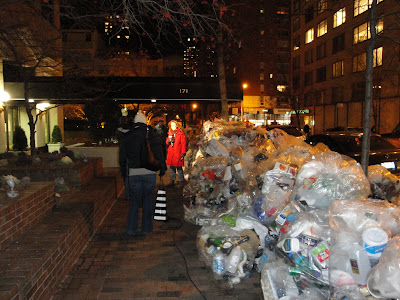 Sometimes you just have to laugh! I always gain satisfaction when exceptional websites like Curbed.com and Gothamist.com pick up my blog posts, like they did about my pile of garbage post today. Usually that's it, but not in this case.


I was walking home tonight allong East 84th Street and noticed a news van, reporter, and cameraman shooting in front of the pile of garbage. I asked the doorman nearby if it was for the pile of trash, and sure enough, it was. Soon after, I received a call from WNBC, asking if they could interview me in front of the pile of garbage. I said why the hell not? Well, I blew the interview. Apparently, I was supposed to be outraged like some people are. I told the reporter that it reminded me of the grimy days of New York that I romanticize and that it doesn't bother me at all. Well, he was stunned, which only made the whole media snowball more amusing. Needless to say, unless they make me out like some nutball at the end of the story, I don't think I will make the 11 o'clock news (nor will A. Fine Blog get any credit as the genesis for the story, but who really cares- it's a pile of garbage people). However, there is one 6' pile of garbage that will have it's 15 minutes of fame- news at 11 (on Ch 4) and news at 10 for that matter (on Ch 11).

P.S. With pick-up scheduled Friday, forecasts calls for up to 3 inches of snow, so who knows, maybe the pile will have another week to grow even larger! Something tells me sanitation will find this heap ahead of schedule given it's new found notoriety.
Email Post
Labels: Upper East Side