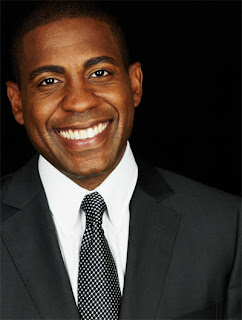 Carlos Watson, MSNBC Anchorman and author of the new website, TheStimulist.com has agreed to 10 questions for our "Living In NYC" segment. Carlos, after graduating Harvard and then Stanford Law has extensive experience both in politics (ex: heading up Clinton's 1992 Miami Dade effort) and political analysis (seen on CNN on a regular from 2004-2006). Carlos has also hosted interview programs for CNBC and Hearst/Argyle stations, the later won him awards including The Gracie Allen award and an Accolade award in 2008. Carlos, who is a Miami native, moved to New York a couple of years ago to take an anchor position with MSNBC and to launch TheStimulist.com which offers a crisp and concise look at news, trends and politics. We thank Carlos for taking the time to share a little window into his life in New York.

AFB: When did you move to New York, and what was your initial reaction?

I moved to NY two years ago. Actually, I had been spending a lot of time here on and off for five years. But two years ago it became home. I have loved it -- the food, the basketball, sometimes the jawboning -- and definitely the friends. Lots of them. NY has definitely been nicer than advertised.
AFB: I understand that you live in Hell's Kitchen, what's the draw?

I like the hustle bustle. It's close to work. Plus it's close to my favorite pick up basketball game -- and you know that matters!
AFB: There is plenty of new development in your area. Have you seen any buildings that peak your interest?

I looked at buying a year or so ago -- and am glad I waited. But next year, I may stick my head out and take a peak again because there were some new buildings that I liked in the 50s as well as 40s.
AFB: I am coffee obsessed. What do you consider the best cup of joe in Hell's Kitchen?

Coffee is fine, but what I really need is Mt. Dew. And I get that anywhere -- the corner store, Duane Reade, you name it. I also need dessert -- and for that Hell's Kitchen won't do. You have to mosey over to the Black Hound on 2nd Avenue. All I can say is that you will thank me later!
AFB: Any restaurant recommendations in the West 50's?

You're asking a guy from Miami. OK. We've got nice Cuban both at Victor's and at Guantanamera. We also have some great Brazilian on 46th Street between 5th & 6th.
AFB: Best meal in Manhattan under $20?

Run don't walk to Righteous Urban Barbeque on 23rd Street between 7th & 8th. The rib tips are so good they should be illegal!
AFB: Best meal in Manhattan over $50?

I'm not a fancy guy so I've got to think about that. But I did have a good meal at the Waverly Inn.
AFB: If you could move to any other neighborhood in the city tomorrow, where would it be?

Probably the Village -- especially during the summer.
AFB: What is your biggest "quality of life" pet peeve here in NYC?

Weather -- need it to be warmer.
AFB: What is your favorite touristy thing to do in NYC?
A little Central Park walk -- or better yet the foreign films at the Angelika or elsewhere.