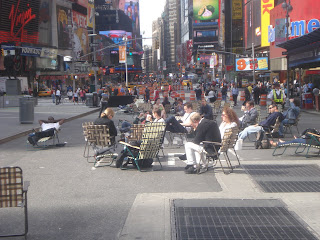 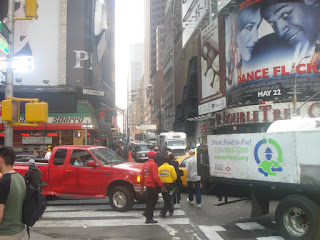 I know, I know- this is just the beginning, and the hideous lawn furniture that they have set out for tourists on Seventh Avenue in Times Square will eventually be replaced by tar covered in gravel and nicer outdoor furniture, but the whole idea just strikes me as silly. As it stands, five blocks of Broadway, in the busiest intersection in the world have been cut off from traffic. So, the 50,000 vehicles that through Times Square every day are now inconvenienced so that a couple of dozen people can lounge in the middle of Seventh Avenue, and already disoriented tourists can walk in the street. This scheme poses so many questions, but here are just a few:

- Is this the best use of $1.5 Million when the city is in an extreme financial crisis?
- Should we encourage tourists to wander the streets?
- How many tourists will get pick pocketed while relaxing or sleeping in the middle of Seventh Avenue?
- What happens when the homeless figure this out? Wouldn't they have the same right to a chair or lounger?
- How many freaks will be tempted to break out the bikini or speedo and tan in Times Square?
- Is there going to be a bike lane on that stretch? Or do bikers have to go around as well?
- Isn't loitering to be discouraged? Could this embrace of loitering in Times Square be a potential security threat?
- Given the obesity epidemic in the U.S., shouldn't the domestic tourists be forced to work off a couple extra calories?

So far, the traffic on Seventh Avenue isn't bad, but it looked rough on Broadway and on 47th Street during the a.m. rush. Planners claim that by cutting off traffic on Broadway there will be no diagonal crossing between Broadway and Seventh, and traffic will actually move 17% faster. You can count me among the skeptics on that one. You also have to wonder how hotels and theaters on the pedestrian stretch will handle cabs, pick-ups, deliveries, etc..And, what will the true impact on traffic be? Maybe it will just scare people out of driving in Times Square, or maybe it will scare people from driving here or coming here at all. It's early in the game, so I can say that the jury is out. One thing is for sure, it is a strange sight. One thing is not for sure, why?
Email Post