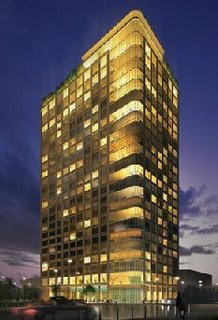 Just got word from Robert Roe of Roe Corporation that Star Tower, a 25 story luxury condominium under construction in Long Island City has decided to reach for the sun and install a 15 KW solar system on the roof. The system will provide some of the electricity for the common areas and will have a generate a modest reduction on power charges reflected in the common charges (already a low .40 cents/psf). The result will equate to an annual Five ton reduction in greenhouse gases. "It's a win/win situation" explained Roe, "various tax credits make the system affordable, while it helps the environment". Roe corp had previously announced a green roof on top of the retail space below which will create a 5000 square foot private park. That's not all- plans are afoot to also integrate solar water heaters on the roof. While Roe was mum about possible LEED certification, it sure seems like LEED points are adding up.
Email Post