Number 5: An Optimistic Plume In An Otherwise Dour Landscape 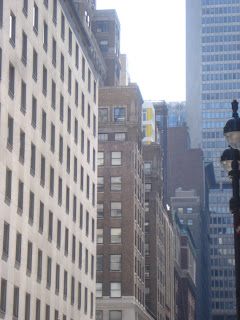 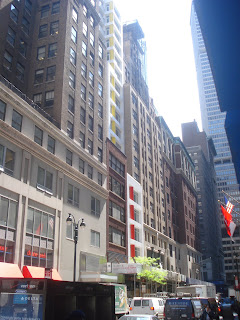 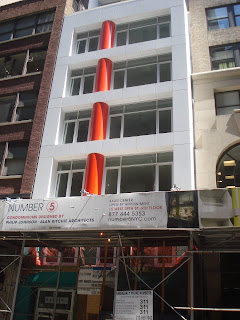 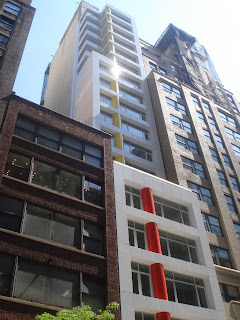 My feet got a pretty good workout today, shooting various condos in the often neglected midtown area between 42nd and 56th Streets (you'll see more of those later).

Oddly, the one condo that I nearly neglected and that I thought I would like the least was my favorite. That favorite was "Number 5" at 5 East 44th, by Phillip Johnson/Allan Ritchie Architects. From the renderings, I thought the building would look preposterous, but as I got my first peak from a block away, I was instantly intrigued. From that distance, coming from the West, all I could see was a couple of stories on top with a yellow column that struck me as a complete contrast to it's surroundings, like an optimistic plume in otherwise dour company. As I approached the building, the initial reaction stuck and as I took in the large red column that ran 5 stories from the ground, followed by 12 stories of yellow column, all against a white metal clad exterior, I was amused that something so seemingly out of place made sense. Perhaps, the photos don't do it justice. Maybe you'll hate it, I thought I would, but I would suggest that you give it a look, just for the fun of it. Clearly the architects took into account that the surrounding contrasts would be brilliant, as the building itself has turned out.
The building is just over 50% sold with 8 of the 17 units remaining including a penthouse. Prices are relatively reasonably at around $1200/psf.
Email Post