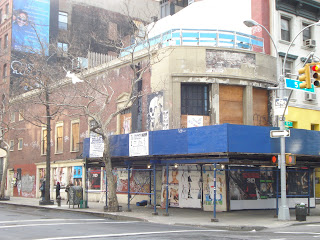 Back in the day, 61 Fifth Avenue served as home to Schrafft's restaurant. Built in 1938 it catered to the upscale lunching set. Prior to that, it was part of the Brevoort Estate and Minetta brook ran behind it (imagine that an actual brook in the Village). Over the past 30 years the building has served various purposes from the Lone Star Cafe to a night club. Fire destroyed much of what was left of the building a couple of years back and the building was put up for sale for $17.5 Million. A deal was struck this March at $15 Mil. (according to city records) and plans are underway to build a 10 story mixed use building. It should include 3 or 4 homes, many multi-level and a commercial space on the ground floor. While it is unclear if the city has granted the variance for a change in zoning, demolition was approved in December and should commence any day.

It is a shame to see a building with architectural significance disappear. According to The New York Times, the architect says that the structure is beyond repair, but an effort will be made to fit in with the Fifth Avenue apartment houses that surround it. This may be a relief to some local residents as there have been complaints about the ability of homeless to access the property and they clearly do not fit in.