From Left And From Right, Calls To De-Citi Citifield 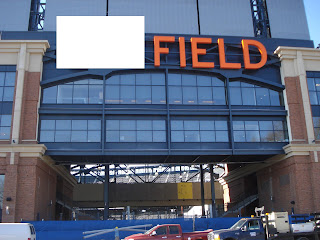 What do left-wing nut Rep. Dennis Kucinich and ultra-right conservative Rep. Ted Poe have in common? Both have written Treasury Secretary Tim Geithner demanding that Citigroup dissolve the agreement with the New York Mets that pays the Mets $400 Million dollars for naming rights to their new stadium.

What do these politicians propose if Citigroup doesn't do it? "Absent this outcome, we feel strongly that you should compel Citigroup to return immediately all federal monies received to date, as well as cancel all loan guarantees", the letter reads. Wow, that's some pretty tough talk!

Will it happen? Well, if you consider Obama's public shaming of the banks yesterday, and the fact that Citi has already relented on the $50 million dollar jet pretty quickly, I'd say that we are bordering on likely. Should Citi back out of the deal? That's easy. Absolutely!