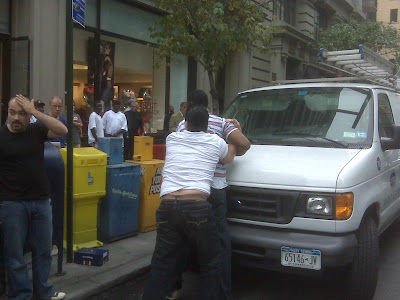 It was a slow motion chase. A Hispanic gentleman jogging after an African immigrant across Fifth Avenue and down the middle of 15th Street towards Sixth Avenue. A crowd had gathered to see why someone on a cell phone was jogging after another. The person being pursued had 3 bags, and for a moment I thought it was either a shoplifter, or after they had stopped and began walking down the street together, some sort of scam.


Perhaps they were a couple who had just engaged in a 3 card monty scam?


Then the slow speed pursuit began anew as the two had turned around and began running back towards Fifth- this time with the gentleman on the cellphone yelling "somebody stop him, he stole a woman's purse". Well that certainly helped. Not enough to become physically involved. Thoughts of strength of health insurance policy came to mind, so did thinking how at 180lbs, I could effectively take out someone who looked to be about 220-240lbs. Then, if the info was bad and the guy was innocent, did I really want to take the chance that I could be guilty of some sort of assault? He could have been armed as well, I thought.


All of these thoughts did not stop a gentleman from stepping out of the crowd and corralling the suspect with an effective full nelson. I stood in the street looking for a police car and my co-worker Khan ran down to Commerce Bank to alert the police officer guarding the bank without glass barriers. The officer was not allowed to move, since Commerce Bank seems to get robbed on a regular basis, but he did call it in.


In the meantime, a struggle ensued as the full nelson was losing it's effectiveness with one man holding the suspect pressed to the hood of a panel van. There was flailing and the cell phone guy was punched in the face and his glasses broken and a small cut was opened on his forehead. Soon enough not one or two police cars arrived, but closer to 10. The suspect was quickly cuffed and accounts taken.


It was then that I learned the reason for such a slow pace. The suspect had grabbed a woman's purse back on 14th Street and Third Avenue. I had picked up the pursuit at the half-mile mark. For a boring holiday week, the scene was a shot of adreneline. It was also a shot of pride of being a New Yorker. For one person, cell phone guy, to take it on himself to chase down a bad guy, and to see other New Yorkers take the risk of potential physical injury to enforce the law and to aid a potential victim was uplifting. It served as a reminder of how we as New Yorkers, under duress, often shine under pressure to make NYC a better place.
Email Post
Labels: Union Square