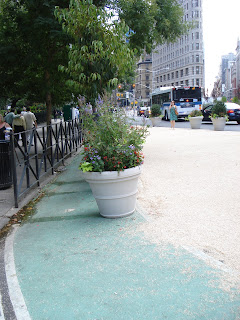 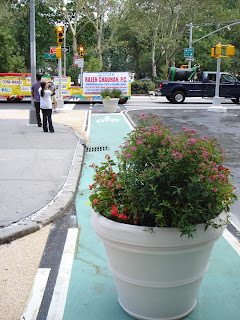 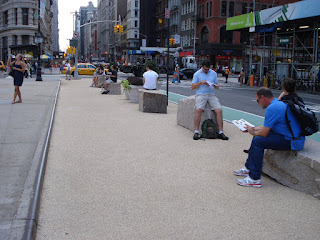 I have been willing to give the new Flatiron "Triangles" project the benefit of a doubt. After all, the idea of taking traffic space and transforming it to human space is a great idea. The planters are nice. The tarring and gravelling of the asphalt is an improvement. And, there is nothing wrong with the slab rocks that act as benches. However, the entire project shows both a lack of planning and a lack of coordination on the part of the DOT.

First, the design of the project with no fencing and only slabs of rock and planters to keep people (mainly clueless tourists) from wandering into traffic is a dangerous, if not a potentially fatal mistake. Additionally, there is no way for pedestrians to exit the top part of the middle triangle (near 25th street). Although there is only one tempting lane to cross going East at 25th street, it is a blind curve and traffic crossing to Broadway is coming down that street.

Second, while beige gravel tarred to asphalt is better than asphalt alone, I doubt that this solution will hold up to heavy traffic. The gravel is already all over the place.

Finally, to underscore the dis-functionality of DOT planning on this one, all you have to do is look at the freshly minted green bike lane. Your bike like to Broadway just got f'd- floral'd that is! The new bike lane on Broadway is now blocked by big planters. I'm not sure how much it cost for the labor, paint, and planning of the bike lane, but apparently they had a change of heart rather quickly.

So, in short, we need some serious reworking of this Triangles project. While the flowers are pretty and the idea is a winner, in essence, one death trap intersection has been traded for another, and has thrown this and many other New Yorkers for a loop.
Email Post
Labels: South of 34th