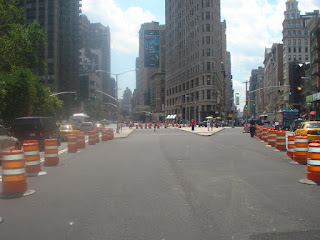 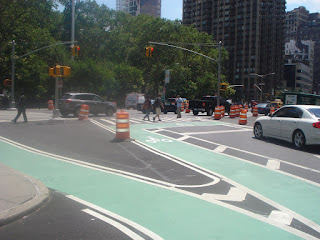 Looking East From 25th between Fifth and B'way
I read in the Flatiron Partnership Newsletter that the "triangles" project was quickly getting squared away (their words, not mine) . For those unfamiliar with the project, the DOT has eliminated several lanes of traffic at the intersection of 5th and Broadway between 25th and 22nd Street to make way for pedestrian plazas, plants and seating. Naturally, I had to take a stroll to see how wonderful everything is turning out.
I have to say that I was disappointed.
So far the Triangles projects consists of around 35,000 square feet of black asphalt (that is hot as hell), around 100 large orange traffic barriers, and plenty of green painted bike lanes. In it's current state, you can't help but to think that you are standing in traffic and about to get hit by one of the numerous express buses making a sharp turn through the new traffic pattern. The black asphalt is not only a poor choice because you can fry an egg on it on a day like today, but also because it has a very temporary feel, like the DOT is gonna call the whole thing off in a couple of weeks. The other negative is that it seems as if a confusing traffic pattern has now been converted into a confusing bike and pedestrian pattern. The spot on 25th where Broadway traffic can cross over to Fifth Ave could be particularly treacherous. The bike lane splits in 2 and disappears until you are across the street. Perhaps they could paint a stop sign in all that green for the bikers because it could be unclear to some if they have safe passage- some may roll right into Fifth Avenue traffic against the light.
All hope is not quite lost on this project, however. The good stuff is yet to come- 170 planters, 40 tables, 120 chairs, and best yet granite barriers to lessen the threat of getting hit by a bus, and yes, 30 light blue umbrellas for hot days. Perhaps they should double up on the umbrella order!
Email Post
Labels: South of 34th