666 Proves To Be Bad Luck For Brooks Brothers 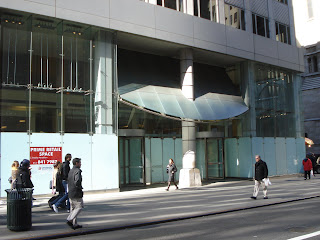 Brooks Brothers, as planned (since last April) has vacated it's flagship store at 666 Fifth Avenue in Manhattan. Although plenty in Midtown appreciated it's convenience, the idea of having a flagship store just 7 blocks form it's original flagship on Madison Avenue has proven to backfire. Brooks Brothers was originally scheduled to stay in the space until at least 2014, but was bought out by Kushner Companies to entice Carlyle Group into a stake in the building. Brooks Brothers was reported to have a below market rent. Half of the Brooks Brothers space is spoken for, with Abercrombie Kids set to move in by 2010. The lease signed back in July was at an incredible $2500 per square foot,"a record by a country mile" (according to Jeff Roseman of Newmark Knight Frank Retail, quoted in The Observer). So far the deal is half genius, now they just have to rent that other half.