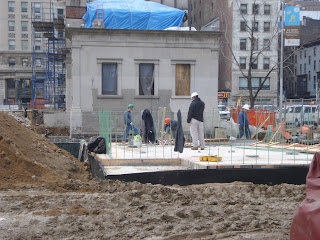 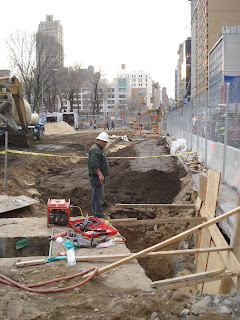 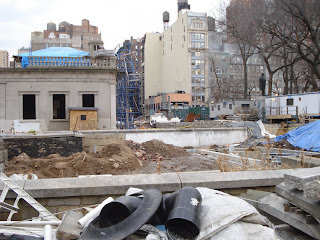 The playground has a long way to go.

What a relief! The foundation for the new restroom facilities in Union Square Park has been laid! According to Union Square Partners the ongoing renovation to the north and west portions of the park is 40% complete and is on schedule for Fall 2009 completion. While it looks like they have plenty of work to do, there has been notable progress through the winter months, especially considering that concrete can only be poured on days when it will be above freezing for several hours at a time. The better part of the west side of the park from 17th to 15th Street has been fully excavated, utilities replaced, tree pits dug, and topsoil poured. The granite curbs along this stretch should be placed soon and the heavily trafficked pedestrian island at 17th and Broadway is nearly finished. The only bummer is that the massive playground area has hardly been touched for the past couple of months, so hopes of using it any time before Fall appear dim. Oh that and Reverend Billy has not been seen for months!
Email Post
Labels: Union Square