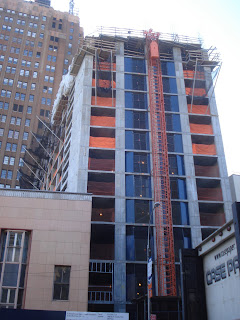 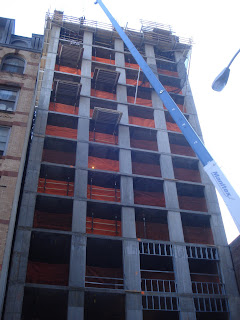 (L) From Canal, (R) from Lispenard

McSam's 20 Story North Tribeca Sheraton Hotel is rising. Right now the building, awkwardly straddling an irregular lot on Canal through to Lispenard (between Church and W. B'way), is 12 stories. The hotel is set back a bit from Canal and fills the lot on Lispenard. It is an unusual site. From canal, it looks like it is in the middle of the lot rising from behind old low rise buildings. A Sheraton may seen odd in Tribeca, but considering that it is Canal Street (I got offered 3 Rolex watches walking 3 blocks), it may actually an upgrade. The hotel will house 360 rooms and was originally slated to open mid-2009. We know that won't happen- looks like a year off. While some people knock McSam, he seems to be keeping the NYC construction industry afloat single-handedly.
Email Post
Labels: South of 34th