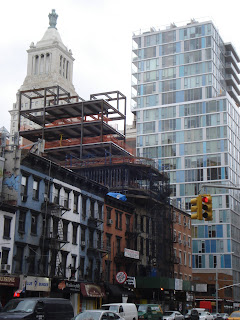 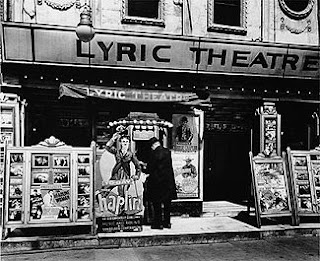 110 Third Avenue, the hit condo in the East Village that sold out at the height of the market, has company, and sordid company at that.

A half of a block to the South, 100 Third Avenue, originally a 4 story building built in 1880, has sprouted an intriguing growth which now bring the structure to Nine stories. An interesting use of a walk-up building to be sure.

I hate to say it, but we have another mystery on our hands here! The building is zoned commercial, and a permit was filed to amend the building height to 90' , contain 3 units, and be re-categorized as F-1B - Assembly (Churches, Concert Halls) . Will it be a church or an assembly hall? Well, plenty of people have assembled at 100 Third Avenue in the past. In 1880 it was a restaurant. In 1910 it became a theater, later named "The Lyric Theatre". In the 1930's it catered mainly to the Bowery bum set. The Theatre would open at 7am an hour before showtime, so the transients could catch a nap before the double feature plus newsreel would begin. Later, the Theatre was renamed "The All Male Jewel Theatre", for, you guessed it gay porn.

So, what to make of this location and its future as an assembly hall or church? Seems like there can be a pretty dramatic difference between the two! Calls to the owner listed reach a number that is out of service and little info is known. If you have the answer, please share.
Email Post
Labels: Union Square