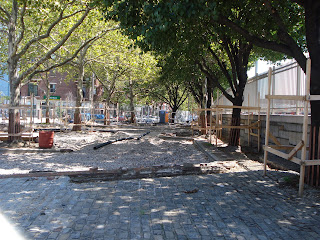 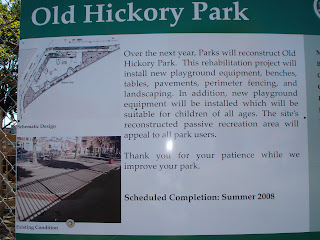 "Old Hickory Park" at the foot of Jackson Avenue abutting the midtown tunnel entrance is under renovation. "Completion Summer 2008" says the park sign. Well not quite, looks to be Fall 2008 if we are lucky. However, that's not the only thing that is just a touch off for this sliver of a park that could measure no more than 1/4 acre.
"Old Hickory Park" is clearly a quizzical play on names. Old Hickory, of course, refers to our controversial 7th President, Andrew Jackson (I won't get into the debate as to whether he was a war hero, savior of the banking system, or a flat out brutal racist). Jackson Avenue itself was named for John C. Jackson, who ran a toll road on Jackson Avenue from 1859 til 1898 when Western Queens was annexed by NYC. The actual origin of the park is unclear and I would love if someone could tell me when it dates to. My best guess is that it was built sometime after the completion of the Midtown Tunnel in 1940. City records show that this tiny park began renovations in April and that the $458,000 project will include playground equipment and passive activity area.
I can't say for certain that the name "Old Hickory Park" was an intentional mistake, a misguided error, or just a play on words. Yet, with a fresh renovation under way wouldn't it make sense to rename the park "John C. Jackson Park" to reflect the historical significance the man for whom the Avenue and the neighborhood of Jackson Heights is named after?
Department Of Parks Description
Map- Old Hickory Park
On a separate but related note, the researching of this blog post brought me back to a familiar site. Forgotten-NY.com is a wonderful historical resource with a wealth of information on Hunters Point, Greater LIC, and many other NYC neighborhoods. It often comes up when I am researching the old LIC and it makes for a fascinating read:
Hackett Buddies: Doomed Queens Borough Hall And Friends (Forgotten-ny.com)
Email Post
Labels: Long Island City